The Assumption of Blessed Mary and St Nicholas 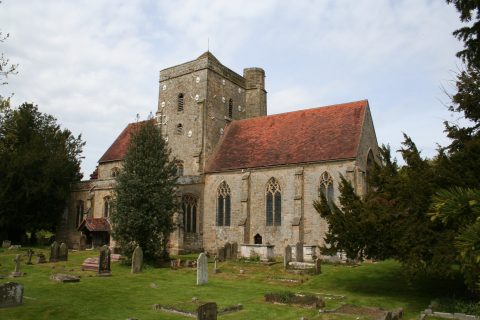 We owe the Church of the Assumption of Blessed Virgin and St Nicholas to Sir William de Etchingham (1333-88) and the unknown mason who worked with him.

Building started in the early 1360s and the chancel at least was complete by the mid 1370s. What you see today is very much the church as they conceived it.

The memorial brasses to Sir William and to his son, daughter-in-law and grandson can be found in front of the high altar and are amongst the finest in the County. Sir William asks us to pray for his soul and there is no doubt that he intended the church to be a collegiate church, hence the relative size of the chancel and the provision of eighteen stalls with their magnificent pairs of misericords are 14th century and mediaeval glass has been preserved in the tracery of the aisle and clerestory windows. There is also a magnificent sedilia with provision for three priests.

One notable feature of the church history is of interest to philatelists (stamp collectors) around the world. Henry Corbould FSA, whose design was used for the worlds very first postage stamp “The Penny Black”, was travelling back to London from the coast, along what is now the A21. Henry was taken ill near Hurst Green and was given rest and shelter at a local hostelry, sadly he never recovered from his illness and died in his room at the public house on 9th December 1844. Henry Corbould was buried in the Parish Church of Etchingham, just inside the south entrance, (Holy Trinity Church, Hurst Green was not in use until 1884) There is a memorial tablet on the wall of the church, this is believed to be the only known likeness of Corbould. In 1990, as part of the 150th anniversary of the postage stamp, the village took advantage of this philatelic connection, producing two First Day Covers to mark the Corbould connection, to help raise funds for church repairs. One cover was issued in January with the full set of the ‘double headed’ stamps and one for the miniature sheet in May. Both covers were limited editions. Sarah Godwin, the designer of the 1987 Isaac Newton stamps designed the cover, her family home at the time being in Etchingham. The covers were cancelled with a special handstamp, the design of which was based on the church weathervane. 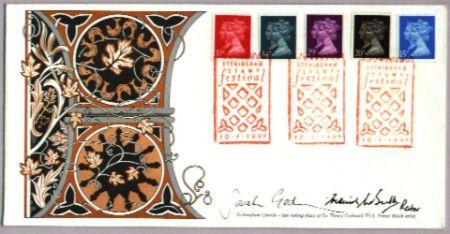 One of the covers signed by the Rector, Reverend Fred Butler, and the cover designer Sarah Godwin. 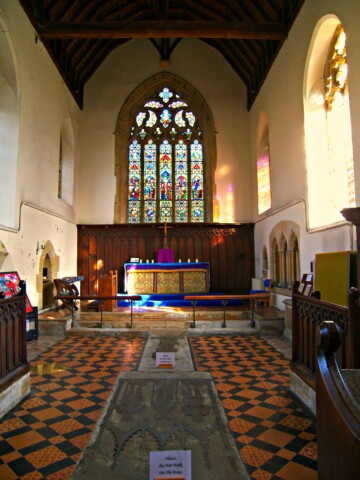